"Unix will give you enough rope to shoot yourself in the foot. If you didn't think rope would do that, you should have read the man page."

The Unix philosophy is a loose idea on how Unix OSs should be written and operate. In order to understand the Bash shell, an appreciation of this philosophy is recommended. To be clear, this is not written down anywhere in an official capacity, but is more of an oral tradition.

Under this philosophy, many of the design considerations that we see 40 years later make a lot more sense. When we are in the terminal, we are transported back to the old days where everything fit this philosophy. Modern programs don't care as much about these things because they are no longer limited by things like size, processing power, or connectivity, but when you are in the terminal, you're in the Unix world.

Another core piece of the Unix philosophy is that "Everything is a file". By treating not just files and directories as streams of bytes exposed through the file system but also keyboards, printers, network connections, and process lists, Unix makes everything an Input/Output device. More on that later.

In the early days of Unix, it rapidly gained popularity due to its "manufacturer neutral" design that allowed it to be run on most hardware. However, competing Unix distributions had slightly different implementations which caused programs to not work across them. The way to fix this was to create a standardized method of interacting with the kernel and other processes. This standard is now known as the POSIX Standard. By following this standard, programmers in any language could be confident that their software would be able to run on any platform because they all used the same Programming Interface.

As a weird note, Bash itself is not fully POSIX-compliant, only POSIX-compatible. There is a ton of complexity there, but we will get away with ignoring it.

What Does All of That Mean?

Alright that was a bit rambling, but here's the takeaway. Everything in the terminal should be able to speak to each other, because everything speaks the language of text streams in the same way. We saw that in the last section where we ran echo Hello World! > file1.

Let's get into that a bit.

STDIO stands for Standard Input and Output. This standardized way of handling data streams, built upon the POSIX standard, allows all programs that use STDIO to be able to pass data between them in a controlled manner.

Shoutout to a Ropper @Snoepie for writing up this helpful explainer:

" When we launch a program that is going to start taking input from a user using STDIO (standard input/ output), three data streams start (a data stream can basically be thought as the path the data will go in from and sent out to. These data streams are STDIN, STDOUT, and STDERR.

The data streams of a key press would be:

As mentioned above STDIN is often a key-press. It can also be a file we feed the system, or even another command we use. It can be looked at as the "ear" of the system or process we are working with. There is a thing related to file IO called a file handle. You can actually think of it as the "handle" the OS picks up a data stream with. File handle 0 is used to represent the STDIN data stream. The primary use of file handles is to shorten certain commands, but you do not need to worry about this too much for now.

STDOUT is where the information received from STDIN is sent to. As in the above example this is usually the users screen. We can send info to files or commands however. In the example of "$ echo "hello world" > hello.txt". The standard out of echo (which we can look at as the mouth of the process) talks to the standard in of the ">" which redirects the output to a file we now made called hello.txt. STDOUT has the file handle of 1, again not to important right now.

Lastly we have STDERR. This does roughly the same thing as STDOUT, but for errors. It is just in a separate data out stream so that we can handle them differently and separately from the actual output we wanted. This can be useful for more complicated commands where we want to log the error data and the successful output data separately. This has the file handle of 2, again not sweat about the file handle. "

Thanks Snoepie for putting that in such a readable format. Here's a more complex diagram that should help as well. 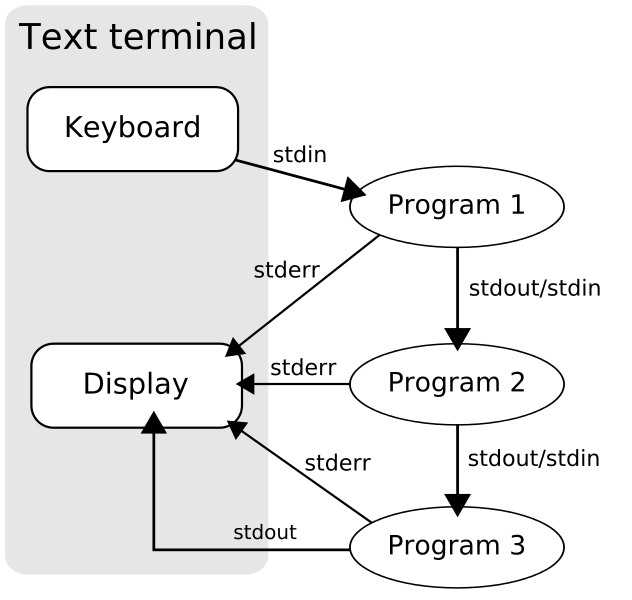 In summary, when an STDIO process begins, three data streams are opened:

Enough reading, back to the terminal. Let's go back over these commands now that we know what we are doing.

In a new directory with nothing in it, run these commands.

Use cat to see what this looks like. Hopefully you aren't surprised what occurred.

We called these > "redirectors" in the previous chapter, but what they actually do is take the STDOUT of the echo command, and send it to a file. Single '>' tells Bash to fill in file1 starting from the beginning, while two '>>' tell Bash to append (just a fancy word to add to the back) to the end of the file. How does Bash know where the end of the file is? Glad you asked.

Basically, Bash walks through each character in file1 until there are no more characters to read, and then adds to that old stream and resaves it as a new stream.

We can also use 1> to redirect STDOUT to a file because 1 is the file descriptor (FD).

There is a lot more to do with this, but this should be good for now.

Alright, here is where it all comes together. The magic happens when we redirect the STDOUT of one command to the STDIN of another command using a pipe. Pipes are a form of redirection, but instead of going to files, the redirected streams go to other commands.

Pipes are represented with | and are one of the more powerful tools we have as we can chain together commands. The Unix philosophy contains "Write programs that do one thing and do it well", so if we chain together programs using their STDIO text streams, we can do a lot of things well.

It is important to note that pipes are unidirectional and only pass data from left to right.

An example of what we can do with this is write a basic pipeline that can count the number of words in a file.

Run these commands first to create a file filled with words. By using append (>>) we do not overwrite the original file.

Hint: Use the Up Arrow key on your keyboard to see the last command you typed. Then all you have to do is change a small amount of the command instead of retyping it

Hint: Type !! and press enter to rerun the last command you typed.

Use cat to verify what is in animals. You should see two lines of with the long list of animals, and two lines with just cats.

Now, let's use some pipes. First, I will introduce the command named uniq. Use man uniq to learn what it does. Notably, it only checks for matching lines adjacently. Luckily, in animals right now, our matching lines are adjacent! So let's try out our first pipeline.

The STDOUT of animals (four lines) is redirected to the STDIN of uniq which then checks for adjacent matches and removes them, leaving only two lines of output.

Let's make this more complicated. Add another line of text to animals using echo cat dog sheep cow dog cat >> animals. Use the Up Arrow to navigate to that old command and run it again.

At this point you should have five lines, with lines 1,2, and 5 matching. Let's run cat animals | uniq again and we will see what comes out.

Unsurprisingly, we get three lines of output, with lines 1 and 3 matching. This is because uniq only sorts adjacent lines. To get around this, we can sort our lines ahead of time, using the command, sort. Check the man page for sort if you want to learn more, then run the pipeline with sort in the middle.

Now we got what we are hoping for! Only two lines, and both are unique. We can pipeline as many commands as we want together, which gives us a ton of programming ability just from the command line. As you learn more commands (or get comfortable using ones you don't know from cheatsheets) you will become more and more capable.

For one more bit of fun "<" redirects the other way, passing a file to STDIN. This means we can do something like:

This gives us the same results as if we used cat on animals and redirected STDOUT to sort. Funky right?

Alright, final thing for STDIO, promise. tee is a command named after T-shaped piping in real world plumbing. What it does is pass the STDIN from another command's output through, while also writing a copy to a file.

Think about what just happened. For your assignment, write out what STDIN, STDOUT, and STDERR are and what they are doing for each of the commands. Answer in the usual format.