What is an operating system or OS?

Most likely, just based off of your everyday use you have a pretty good idea about how to use Windows. However, what we are about to go over is what is actually occurring under the hood. For the everyday user of a computer, there is no need to know any of this, but as hacker, with the need to understand the underlying systems, learning the inner workings of operating systems is a necessity. In order to master the system you must remove the blind spots that will limit your ability to grow.

The technical word for these blind spots is "abstraction". Abstraction is a word that can be found outside of technical spaces to mean a way of removing specificity in order to understand more easily. To quote wikipedia: "Conceptual abstractions may be formed by filtering the information content of a concept or an observable phenomenon, selecting only the aspects which are relevant for a particular subjectively valued purpose. " This whole course I try to abstract away the things you don't need, so you are left with what matters.

Similarly, Operating Systems abstract away the requirement for end users to be able to program or know how to set up a network connection, or really do most things with their computer.

Everything is handled for the average user by the Operating System... but you are no longer the average user. Over the next few chapters we will remove more and more abstractions from our view of how computers work. Each abstraction we remove will show us an entirely new world of extraordinarily complicated material that was just below the surface. It might seem overwhelming, but remember, nobody understands all the abstractions. It is good to know they exist, and that there is something underneath where you are operating, but there is no need to fully understand the underlying technology to do great work.

We don't have to care about any of this to be great, which is pretty amazing.

So what really is an operating system? In short, an OS is the interface between the end user and the computer hardware.

To start, the hardware is generally controlled by something known as firmware, which is the code built into the electronics that tell them all how to run as individual components. Firmware is the OS for the hardware, but on a normal computer, is not considered part of the OS the user interacts with. 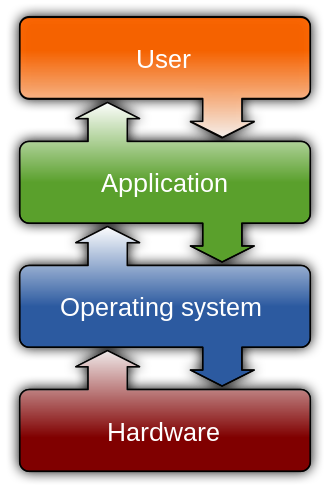 Coordinating individual hardware components is the kernel, the core of the operating system, which coordinates those individual components so that the computer can run. Software, as we think of it, is the code that a user interacts with, but the kernel, even if we never interact with it directly, is still software as the core of the OS. Running on top of the OS is more software, which are what we think of as processes and programs. These user processes interface with the OS, which then do all the work with the kernel to ensure the processes work properly.

Responsibilities of an Operating System

We know that the OS is responsible for ensuring hardware is used appropriately, but what does that look like? First we have to think about what hardware is on a computer. Some important pieces of hardware are:

Now that we have discussed some of the hardware, we will discuss the most important roles of an OS.

There are a few major families of OSs, most notable Unix-Like and Windows. Both have a long history (and rivalry), but as you can see in the chart below, the open source UNIX has grown into a vast family of very different OSs, while Windows has steadily progressed to the modern Windows 10. You don't need to memorize anything in this, but it's good to know.

For a visual depiction of the Unix family: 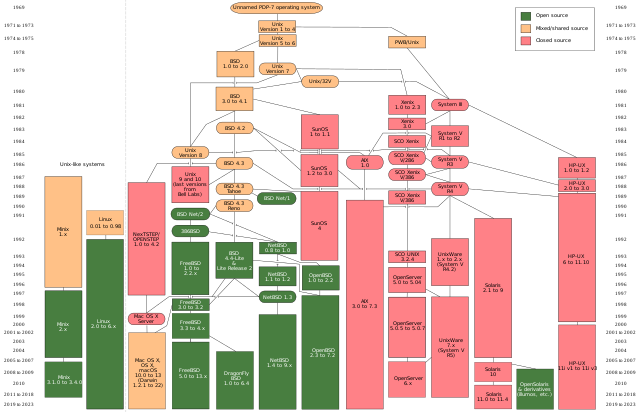 Windows is less interesting, but still worth pointing out the highlights.